April 17, 2019
An example of the kidneys on a chip that will be heading to the International Space Station is held out by an astronaut figure.

Launch preparations are underway at Cape Canaveral for study of space flight effects on kidneys; lift off slated for May 4.

A kidneys-on-a-chip experiment is being readied at Cape Canaveral, Florida, to fly aboard a SpaceX Dragon C19/Falcon 9 supply shuttle to the International Space Station. At an altitude of 250 miles, the chip technology will be used to study reduced gravity and other space flight conditions on kidney physiology.

The unmanned SpaceX mission CRS17, contracted with NASA, is slated for early May depending on weather, launch window, and other conditions. The launch date and time will not be official until after the Flight Readiness Review. Rendezvous with and capture by the International Space Station, and installlattion of the cargo, are expected about a day after the  launch.

Three other organs-on-chips will be on-board for studies of lung host defenses, the blood-brain barrier, and musculoskeletal diseases. Developed by research groups nationwide, the four projects are part of the Tissue Chips in Space program. This will be the second time that National Institute of Health tissue chips have been flown into space. The first study was on aging and the immune system.

The National Center for Advancing Translational Sciences at the National Institutes of Health spawned the creation of these small, bioengineered tissue chips, which model the physiology of human organs on a living, 3-D microscale. They have been developed to speed the search for new drugs and therapies and get these treatments to patients faster. Researchers use the tissue chip systems to study healthy and diseased states, and to test medications and other treatments.

Scientists at UW Medicine and the University of Washington School of Pharmacy, with collaborators in industry and other agencies, designed the kidney-on-a-chip component.

Several of them are at Cape Canaveral now preparing the devices.

The credit-card size chips contain fluid microchambers lined with human-derived kidney cells. For this space mission, these chips will simulate one type of kidney tubule.

In actual kidneys, similar anatomical structures regulate absorption and release of substances in the blood, among them medications and toxins. Vitamin D metabolism, important for bone strength, takes place in kidneys. Kidneys also protect against fluid retention and other biochemical imbalances.

Aboard the International Space Station, where they will be exposed to microgravity for about two weeks, the organs-on-a-chip might reveal why kidney problems occur often and quickly among astronauts. 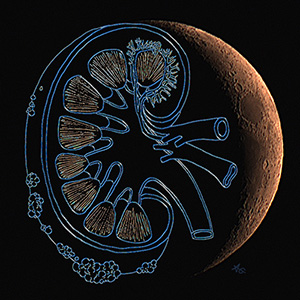 They noted that this space study could provide insights into the development and overall health implications of kidney diseases on Earth, in less time than is possible with terrestrial research in humans.

Kidney disease occurs in about 10 percent of adults. Treatment can diminish quality of life. New tools, like the kidney chips, could help find ways to prevent or treat kidney problems in astronauts, as well as in people who will never venture into space.

“Certain conditions related to poor kidney health appear more rapidly in space and could have life-long consequences,” Himmelfarb said. These include protein in the urine, bone loss, and kidney stones.

“Aging of cells accelerates in space,” he added, indicating that organ-on-a-chip space research could uncover medical knowledge useful beyond a specific disease.

“We’ll be able to see in a matter of days what might take months on Earth,” the researchers said. 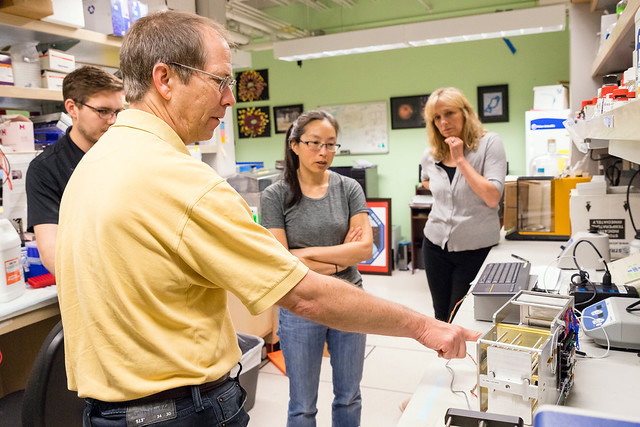 Figuring out how to pack an experiment for a space flight. Photo by Alex Levine/UW

While microgravity alone might harm kidneys, the scientists also pointed out that astronauts are confined to a closed environment, are exposed to questionable chemicals, eat an unusual diet, and conserve and recycle water for drinking. Any of these could be rough on already vulnerable kidneys.

According to Kelly, the kidney-on-a-chip technology will evaluate how diminished gravity affects the ability of tubules, in both males and females, to conduct the basic work of kidneys. He explained that kidney cells sense gravitational forces in ways that direct the cells to carry out their activities.

“Kidney tubules are polarized,” explained Yeung, “and have an inside and outside. We are curious to see if the cells still stay polarized without Earth’s gravity, and what effect this might have on kidney cell function and on disease progression.“

The cells’ shape, spatial orientation and response to fluid flow could be disrupted in space. This distortion could alter how the cells that line the tubules transport water, electrolytes, vitamins and toxins, and could make tubules prone to damage from proteins or other biochemicals.

The researchers plan to send 24 Nortis Triplex Chips to the International Space Station in temperature and carbon dioxide pump assemblies. 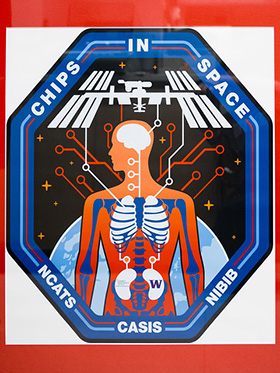 After berthing, these will be placed in incubators and later put in a Life Sciences Glovebox. At the end of the experiment, they will be preserved and cooled to await transport back to Earth.

“We had to shrink the size of our usual equipment to fit the tight quarters of the space station,” Himmelfarb said. It was like shoehorning a refrigerator into a microwave oven, while maintaining proper environmental conditions for the experiment.

“We had to make some 270 modifications to fit the setting of the International Space Station,” the researchers explained. Precautions were taken to keep the chips from shattering and creating a free-floating fragment hazard.

“On Earth, studies can be repeated. On the ISS, we have only one shot to get this experiment right. It will be a tense time for us,” Himmelfarb said.

The set up took into account the realities of working in orbit. The astronauts will perform experiments while wearing cumbersome gloves and space suits. Miniaturization and automation, however, should simplify their tasks – and provide new ideas for making such experiments easier to perform on Earth.

“One of the cool things about being at Cape Canaveral is that we can watch the astronauts do the experiments in real time,” Himmelfarb said. 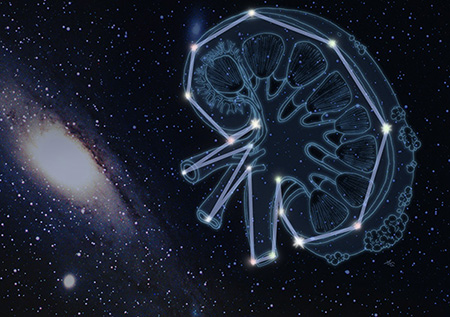 Meanwhile, in normal gravity on Earth, a UW team will conduct the same protocols on kidney chip cells from the same donors, to obtain comparative, control data.

This summer, a second tissue chip launch to the ISS will test potential drug therapies for the biological changes observed during this mission.

The National Center for Advancing Translational Sciences at the National Institutes of Health and the International Space Station United States National Laboratory, are funding Tissue Chips in Space, in collaboration with the National Aeronautics and Space Administration.

Kim and Kelly are scientists at the UW Medicine Institute for Stem Cell and Regenerative Medicine Research. Kelly and Himmelfarb are investigators at the Kidney Research Institute, a collaboration of Northwest Kidney Centers and UW Medicine.

Kelly also admits he is a sci-fi space exploration nerd who has a Star Trek Next Generation Borg Cube in his office.

Downloadable news videos for broadcast or web use:

Learn more about the NIH’s NCATS Tissues in Space Program

The launch of the SpaceX mission CRS17 will be covered live on NASA TV, as well as its rendezvous and capture by the International Space Station. NASA TV site: http://www.nasa.gov/ntv or http://www.ustream.tv/nasahdtv.

Additional information on the Space X cargo resupply mission flight 17 to the ISS, as well as  information on its live webcasts and YouTube viewings, is available at www.spacex.com.

Check NASA TV for the updated schedule of coverage of the launch  and for press briefings on this mission.