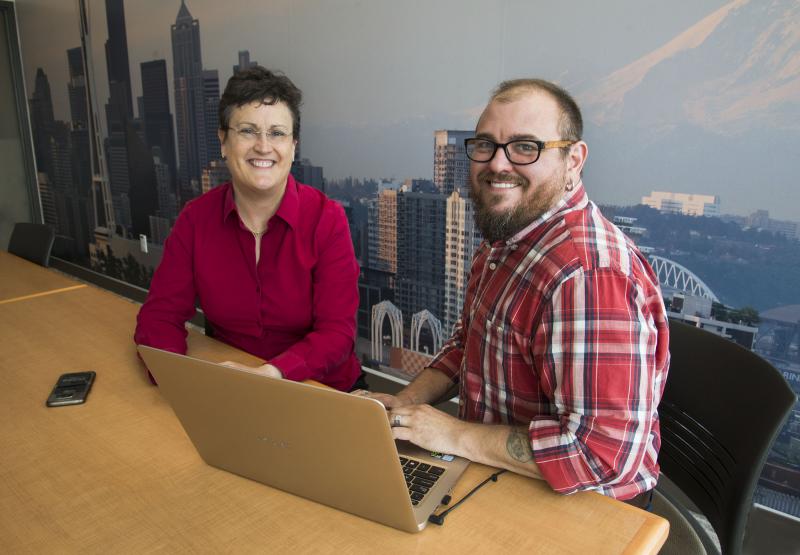 The two checkboxes appear on countless forms: male or female.

But countless Americans don’t fit into either box.

Transgender and gender-nonconforming individuals are, quite literally, without count, notes Dr. Corinne Heinen. The U.S. Census doesn’t ask about transgender status. But some dramatic statistics about this invisible group are known.

“The lifetime suicide attempt rate is 41 percent, 10 times higher than the national average,” Heinen said. “The healthcare disparities for gender-diverse persons are some of the most staggering in all of medicine.”

She would know:  a family and HIV medicine physician, she has worked with gender and sexual minority patients for 25 years. She’s witnessed the barriers to care that have left people suffering from conditions that should be easily treated.

One of the biggest barriers?  Many physicians simply aren’t prepared to care for these patients. Transgender medicine has never been part of the curriculum. But Heinen is working to change that. She’s the director for the new LGBTQ health pathway, which aims to prepare med students to provide culturally responsive care for the LGBTQ population.

She’s also leading a systemwide effort to do the same in all our clinics, as part of the UW Medicine Healthcare Equity Initiative.  Since March, an education campaign has been underway at UW Neighborhood Clinics to instruct staff on how to use gender-affirming language and anticipate the needs of patients. “We’re training everyone so these patients have a comfortable first experience in our primary care clinics,” Heinen said.

Meanwhile, Heinen is working with primary care physicians to discuss specific medical needs for this patient population. In general, she said, no special knowledge is needed. “It’s not like cross-sex hormones are a new class of medication, but there are specific considerations in using them in this setting.” Even some routine procedures, such as cervical cancer screenings, may be approached slightly differently.

It makes sense to start with primary care because this is the gateway for patients to get all their health needs addressed, Heinen said.

“This opens up the front door of our health system to get people the care they need,” Heinen said.

The larger vision is to weave together all of our services, including specialty care. Heinen and her team have already identified specialists in endocrinology, urology, plastic surgery and gynecology who are equipped and enthused to serve this population.

And according to the best available stats, this population is not small. A CDC-administered annual survey suggests that in Washington state, one in 200 adults are transgender or non-binary.

What can providers do to help with the program? One of the easiest and most impactful ways is to add patients’ pronoun preferences to their electronic health record. That will help patients feel much more comfortable as they receive care across UW Medicine, Heinen said.

Heinen and her team are also looking to build a network of “gender ally” primary care providers to learn more and assist colleagues when questions arise. She encourages interested providers to reach out to her.

After more than two decades of seeing this population marginalized and discriminated against, Heinen is encouraged by a shift in public awareness and perception. Teens and young adults seem to take a more expansive view of gender than their predecessors. “There’s been a pretty big shift in the awareness of gender diversity,” Heinen said. “In another generation, people might not even know why we had those checkboxes.”