The University of Washington in Seattle is among eight U.S. research sites undertaking a study to confirm whether brain imaging can detect signs of autism spectrum disorder in infants.

The National Institute of Mental Health, part of the National Institutes of Health, is funding the multicenter research with a five-year, $9.5 million grant. The study’s co-lead investigators are at the Washington University School of Medicine in St. Louis and the University of North Carolina at Chapel Hill.

The new grant supports the continued efforts of the Infant Brain Imaging Study (IBIS). A network of scientists will scan the brains of 250 children who have an older sibling with autism, looking for differences that predict which high-risk children are more, and less, likely to develop the condition.

“Our studies have identified brain alterations in high-risk infants at 6 months of age that can predict a later autism diagnosis,” said Dr. Stephen R. Dager, professor of radiology at the University of Washington School of Medicine and principal investigator here. “Now we are going to work with a new group of families to make sure our initial findings can be replicated.” 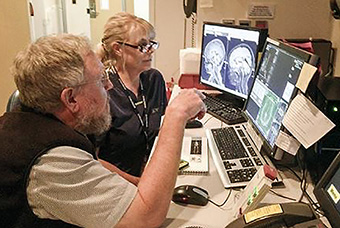 Infant siblings of children with autism have a 20 percent chance of developing autism spectrum disorder themselves – a much higher risk than children in the general population. Researchers believe that if brain scans can accurately identify which infants are at highest risk, then careful assessment over the first two years of life could detect behavioral symptoms as soon as they emerge.  This would allow interventions to start sooner and improve those children’s outcomes.

IBIS researchers published initial findings in 2017, which showed that magnetic resonance imaging (MRI) correctly identified 80% of babies who went on to be diagnosed with autism at age 2. They also correctly predicted more than 90% of babies who subsequently did not receive that diagnosis.

“These imaging finding are very exciting and, if replicated, can allow much earlier diagnosis of autism,” Dager said.

The UW Autism Center part of the Center on Human Development and Disability, has long studied the signs of autism and the effectiveness of intervention strategies and has been involved with IBIS since its inception.

“We have learned so much from the children and families in the IBIS studies.  We understand much more about the way autism symptoms unfold in infants with autism risk. These brain findings in the first year of life could be game-changers if the findings hold up. They could allow us to approach autism in a new way, before symptoms emerge,” said Annette Estes, director of the UW Autism Center and a research professor of speech and hearing sciences. She is co-lead investigator of the IBIS study in Seattle.

Inspired in part by the IBIS study, parents from around the country brought younger children to be evaluated at the UW Autism Center, which established its Infant and Toddler Clinic in spring 2017. The clinic evaluates infants and toddlers up to age 24 months, and psychologists and behavioral analysts create a treatment plan with clinic- and home-based activities, just as they do for older children.

For the new study, babies at ages 6 and 12 months will undergo MRI scans while asleep. Those scans will enable analysis of both the brain’s structure and its functional connections. Infants also will be evaluated for language development, repetitive behaviors, social responsiveness and other behaviors that may, in the future, help understand how autism unfolds in the first year of life.

“Our goal is to improve outcomes for infants at highest risk,” Estes said. “Intervention that starts before children fall far behind in development, and perhaps before symptoms become clear, might prevent many problems faced by families today.”

Families participating in the study must travel to the IBIS screening site nearest their hometowns. The imaging sites are located in Seattle; St. Louis; Philadelphia; Chapel Hill; North Carolina; and Minneapolis-St. Paul.

To learn more about the IBIS study in Seattle, visit the website or email simardn@uw.edu.  Other institutions involved are Children’s Hospital of Philadelphia, the University of Minnesota, New York University; and the University of Alberta and McGill University, both in Canada.